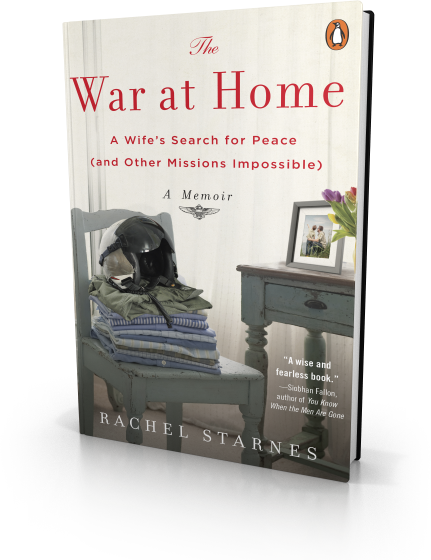 “The War at Home navigates the joys, fears, compromises, and casualties that create the terrain of marriage. And if you are a military spouse, her memoir will reveal thoughts you never even knew you had. This is a wise and fearless book.”
—Siobhan Fallon, author of You Know When the Men Are Gone

“This is one of the most honest and genuine memoirs I’ve ever read, as well as one of the most finely written. There’s not a false note in these pages. Rachel Starnes’s story is at once both singular and emblematic, and as I read it I found myself wondering just how many others out there are going through experiences similar to the author’s while lacking the means to express them as she does so beautifully in this riveting account. The War at Home is that rare thing: a book about the here and now that promises to last well beyond next month or next year.”
—Steve Yarbrough, award-winning author of The Realm of Last Chances and Safe from the Neighbors

“Rachel Starnes has written elegantly and with deep feeling and insight about a common, but little written about and increasingly less understood, facet of American life. I found The War at Home a fascinating and compelling read.”
—Karl Marlantes, New York Times bestselling author of What It’s Like to Go to War and Matterhorn

“The War at Home instantly charmed me. The messy and realistic life of Rachel Starnes pulls back the veil on one of the most selective and specialized communities of the world—the wives of Navy TOPGUN fliers. But don’t fret, there are very few finger sandwiches here—Starnes shows up to Wives Club meetings with six-packs of beer and a punk-rock attitude. With Texas wit and daughter-of-an-oil-rigger grit, she delivers a powerful memoir of military family life.”
—Anthony Swofford, New York Times bestselling author of Jarhead

“The War at Home invites us into two worlds not often glimpsed—the loaded culture of Navy wives and the painful doubts of early parenting. Haunted by her troubled past, Rachel Starnes navigates these two worlds with striking honesty, exposing her faults and forging a way toward a future worth fighting for.”
—Katey Schulz, award-winning author of Flashes of War

“The War at Home, Rachel Starnes’ stunning literary debut, is simultaneously harrowing and heartbreaking; an unflinching portrayal of the hidden costs of military service and the everyday challenges of building a life with her Navy pilot husband. This book is a profound narrative testament to the courage required to survive the cycles of connection and disconnection that the military life demands. Starnes takes a long look at her own childhood and personal history of relationships with men who leave, and the memoir explores her struggle to avoid a similar destiny for her two young boys. Filled with poignant lines and beautifully rendered scenes, the prose is also, at times, laugh out loud funny as Starnes stumbles through temporary jobs, friendships, and homes. Through her unfailing honesty, her humor, her courage on the page, and her willingness to write into the silent spaces, the reader finds a new wartime hero in Rachel Starnes.”
—Steven Church, author of Ultrasonic: Essays and The Day After The Day After: My Atomic Angst

“The War at Home is an honest, probing self-examination of a family battling its own conflicts against the backdrop of a nation on perpetual alert.”
—Alison Buckholtz, author of Standing By: The Making of an American Military Family in a Time of War